LONG BEACH, Calif. – At least every other day, Selene Zazueta has to tell her 8-year-old daughter that she can’t play outside with her friends. As upsetting as that is, the girl has asthma, and the family lives just off Interstate 710 in Long Beach, in an area known as “Asthma Alley.”

The story of Zazueta, 38, and her daughters, Emma Mijares and Isabella Ramirez, 9, is just one such story of life in a city with the dirtiest air in the country.

Of the 100 largest cities in the country, Long Beach comes in dead last in terms of air quality, according to the 2019 American Fitness Index rankings, published by the American College of Sports Medicine and the Anthem Foundation, a nonprofit of the health insurance provider Anthem, Inc.

The city sits between the Ports of Los Angeles and Long Beach, the two largest ports in North America, according to the Journal of Commerce. Combined, the ports account for nearly 30% of the continent’s market share; in addition, most imports from Asia enter the country here, are loaded onto trains and tractor-trailer rigs and shipped to warehouses and factories all over the country.

Of the 100 largest cities in the country, the top 10 with the worst air quality are in Arizona and California.

Zazueta’s story is a familiar one to Sylvia Betancourt, a project manager for the Long Beach Alliance for Children With Asthma. Families of children with severe asthma tell her they feel helpless against the effects of Long Beach’s poor air quality on a daily basis, she said.

“There’s nothing like describing that lived experience, in particular, with seeing your child not not be able to breathe,” Betancourt said.

Zazueta said she has seasonal allergies – as does her older daughter, Isabella – something she never experienced until moving to Long Beach 12 years ago. Shortly after Emma was born, Zazueta said, the family made frequent trips to the hospital, as night after night Emma would wake up gasping for air.

“At first I just thought it was a cold; I had never really heard of asthma,” Zazueta recalled. “It was not until I found (the Long Beach Alliance for Children With Asthma) that I fully realized what it was.”

Since 1999, the alliance has worked in outreach and medical training to reduce the number of hospitalizations and school absences as a result of asthma. More than 25 million Americans have asthma, a long-term condition that intermittently inflames and narrows the airways of the lungs, causing shortness of breath, wheezing and coughing. Severe asthma attacks can lead to death. 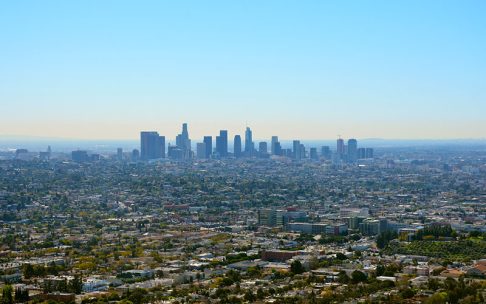 ‘Many lives at risk’: What pollution rollbacks could mean for California and Arizona

“(They) all knew that asthma is a chronic illness,” Betancourt said, “and there are high risks involved, risk of even death, but it doesn’t have to be that way.”

None of this surprises K. Benjamin Hagedorn, an associate professor and geochemist at California State University, Long Beach. As someone who teaches a class on air pollution, Hagedorn said Long Beach and Southern California in general rank pretty low in terms of air quality because of emissions and low rainfall.

“From about March through October, there is just no process that kind of flushes or purges the atmosphere, so we have this trend where those emissions just accumulate and are baked by the sunlight to form pollutants,” Hagedorn said.

The study advises that people who live in areas of poor air quality should avoid outdoor activities during rush hours and exercise away from heavily trafficked roads, but for many children in and around “Asthma Alley,” Betancourt said those may not be viable options.

“Sometimes you really don’t have any choice when it’s too hot so you have to open your windows,” Betancourt said. “When you do that, well, you’re exposing your child and your family to dirty air that literally you can you can smell it. You’re breathing that in.”

But for the Zazuetas and similar families, that might be the only option for now. Zazueta said she hopes she can use her own experiences to continue to educate families, as she now volunteers for the same organization she turned to in her time of need.