California Could be First State to Phase Out Single-Use Plastics

“It’s time to get serious about this,” said Assemblywoman Lorena Gonzalez Fletcher (D-San Diego), who is spearheading legislation targeting the use of plastics along with Senator Ben Allen (D-Santa Monica).

If passed, those bills would require the state to reduce or recycle 75 percent of single-use plastic packaging and products by 2030. In addition, manufacturers would be required to ensure that all packaging sold or distributed in California is recyclable or compostable by 2030.

Why now? Gonzalez Fletcher cited the mounting impacts of plastic waste on environmental and human health, and the loss of Asian markets for recycled plastic material.

“We have a crisis coming and we know it,” she said.

Scientists estimate that 19 billion pounds of plastic waste end up in the ocean each year, severely impacting sea and bird life. If plastic production and disposal continue at the current rate, by 2050 there could be more plastic in the ocean than fish, according to the World Economic Forum.

Dear LA, these are the people who sort through your recycling. A “thank you” is in order, every day. ⁦@LAist⁩ pic.twitter.com/OwcnJ4Fc4R

Historically at least one-third of California’s recyclable material was exported to overseas markets, mostly to China, according to the state’s recycling authority, CalRecycle. But China stopped accepting most material in 2017, leaving municipalities scrambling to deal with mounting waste.

Less than 15 percent of single-use plastic is recycled in California, according to Californians Against Waste. The non-profit advocacy group, which helped to craft the new legislation, notes that the value of scrap plastic is less than the cost of recycling it.

“The sad truth is,” Sen. Allen said, “that so much of what we throw into (recycling) bins is not getting recycled.”

While the proposed legislation would require CalRecycle to set goals and guidelines for eliminating single-use plastic, many of the details have yet to be worked out.

One inspiration? Rules put in place last year by the European Union. There, plastic-based products with readily-available alternatives, including cotton swabs, straws and drink stirrers, will be phased out completely. The EU policy also sets high goals for recycling items like plastic bottles.

Under pressure from consumers and environmental groups, some manufacturers and companies, including Trader Joe’s, are setting their own goals for phasing out avoidable plastic. Recently, a group of major companies announced a pilot project that will allow consumers to purchase items like shampoo, orange juice and ice cream online and then return the packaging to be refilled.

Representatives of plastics industry groups were cautiously supportive of the goals of the proposed California legislation, but said they were awaiting the details. Tim Shestek, senior director for state affairs at the American Chemistry Council, said in an email that the proposal’s goal of phasing out plastic waste “is consistent with the goals we set last year that 100% of plastics packaging is re-used, recycled or recovered by 2040 and that 100% of plastics packaging is recyclable or recoverable by 2030.” 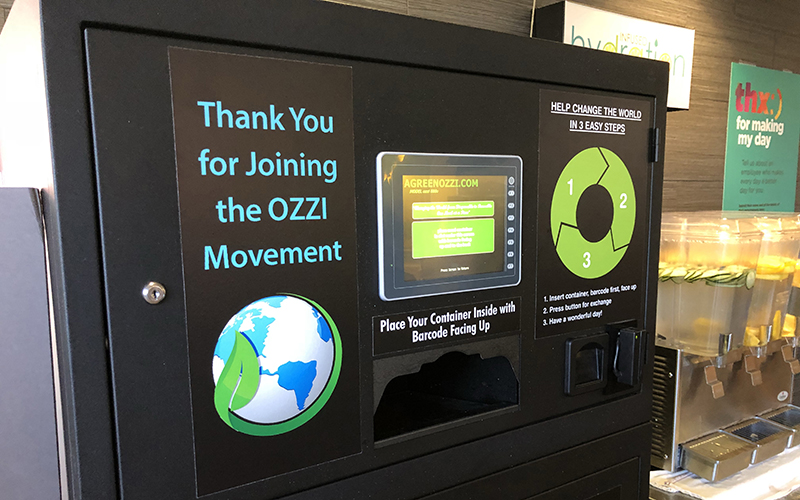 Policies on Composting, Single-Use Plastics are Catching on in Northern Arizona | Cronkite News

Scott DeFife, vice-president of government affairs for the Plastic Industries Association also said his group shares the goal of increased plastic recycling and recovery. But he said part of the reason for current, low recycling rates lies with the waste management system and consumers’ access to recycling.

“Obviously, the material ending up in the environment is the worst case scenario and none of us want to see that,” DeFife said. “As an industry we’re working on … how we can recover the material better, how it can be recycled better, but also end markets for the use of recycled material.”

The Allen-Gonzalez plastic waste legislation is supported by numerous environmental groups, including the L.A.-based 5 Gyres Institute, Surfrider Foundation and Californians Against Waste.

Mark Murray, executive director of Californians Against Waste, applauded the bill for its ambitious goals. He said consumers shouldn’t be held responsible for packaging waste.

“The thrust of this legislation is to make the producers responsible for creating a circular economy when it comes to plastic packaging,” he said. He noted that glass, aluminum and paper have much higher recycling rates, overall, than plastic. “If [plastic] is going to continue to exist, it’s going to have to demonstrate the kind of closed loop recycling capabilities as other materials that we generate.”