LONG BEACH, Calif. – They call it the classroom on the roof. On an early May morning in the Wrigley neighborhood of Long Beach, I’m harnessed to a group of volunteers and trainees for GRID Alternatives. The workers on today’s installation are retirees, veterans, formerly incarcerated people, at-risk youth, and others seeking to transition into green energy jobs. Under the supervision of solar installation specialist Natalie Andrade, I’m helping to build the attachment that will hold the forty-pound silicon modules in place.

Andrade came to GRID through the nonprofit’s partnership with Homeboy Industries’ Solar Power training program. Since 2010, Homeboy has offered education in solar technologies to formerly incarcerated, gang-affiliated, and other at-risk individuals by paying tuition for photovoltaic classes at the East Los Angeles Skills Center. GRID provides many graduates of the program free, hands-on training for careers in solar energy. Andrade, who has faced homelessness and addiction, now prepares trainees for green jobs, while also providing underserved communities with solar panels free of charge.

Learn more about the work of Grid Alternatives in this Earth Focus episode.

The rooftop classrooms where Andrade teaches, like the frontline neighborhoods where many GRID trainees grew up, are in the environmentally-disadvantaged zones of Los Angeles. By providing solar panels, GRID works to offset the energy burden of low-income households. Margaret Anne Apodaca, who has lived in her Long Beach home for more than 30 years, is now likely to save between 50 and 80 percent on her electric bill. Those on the roof with me are learning skills for success in the solar industry. In 2019, GRID will help its 500th trainee into a career, while providing more than five million dollars in lifetime savings for low-income families.

Beyond the challenges of low income and the health problems that correspond with poverty, residents of these red zones suffer greater exposure to pollutants and higher asthma rates. As part of the objective to address concerns of environmental justice as well as climate change, at least 35 percent of California Climate Investments through cap-and-trade programs are reinvested in these neighborhoods. GRID, whose triple-bottom-line is “People, Planet, Employment,” partners with the state to ensure that the same communities who have been most harmed by industry stand to benefit from new environmental technologies. 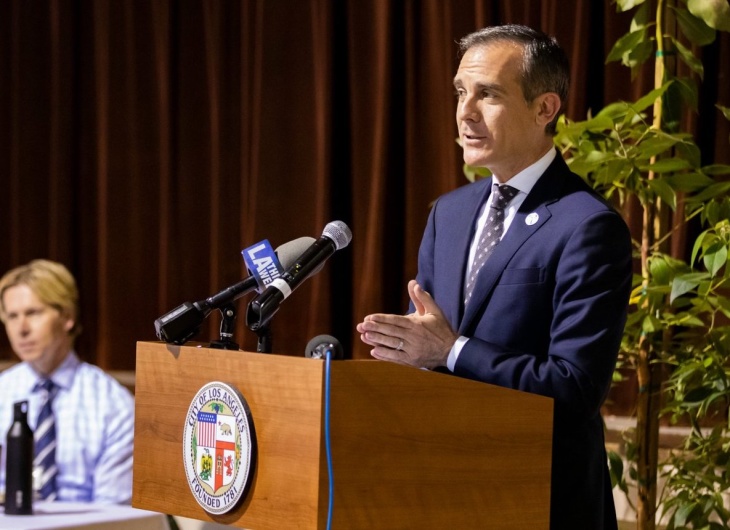 Mayor Eric Garcetti’s Green New Deal for L.A. demonstrates a commitment to environmental justice as part of the larger effort to combat climate change in the city. Calling for 100% renewable energy by 2045, mostly through solar, hydro-electric, and wind, the plan also promises “to ensure that every Angeleno has the ability to join the green economy, creating pipelines to good paying, green jobs, and a just transition in a changing work environment.” If successful, the mayor’s initiative will create 400,000 jobs by the year 2050.

Already the number one solar city in the nation, L.A. has the chance to minimize the risk to environmentally-disadvantaged communities while providing workforce development to underserved populations. The majority of jobs in solar energy are in installation and project development, and entry level installers earn an average of $19-24 per hour. Because 67% of solar jobs do not require a bachelor’s degree, yet they pay high wages and offer opportunities for career advancement, solar could be a crucial industry in the broader citywide effort to pair environmental justice and green energy goals.

From Prison to Solar Panels

If Los Angeles is to become an equitable solar city, which invests in communities as well as technologies, people with a criminal record people could benefit. Though nonprofit organizations like Homeboy and GRID provide workforce training to the formerly incarcerated, California prisons fail to connect inmates to employment services, and few corporations are willing to hire individuals with a record. Though the state set new goals in 2012 to facilitate transitions for inmates, a 2017 report demonstrates that 62% of prisoners failed to receive services geared toward rehabilitation and employment. Recidivism in California remains around 50%, even as the overall population of the incarcerated is dropping in the state.

David Andrade, Volunteer Training Coordinator for GRID and Natalie’s husband, was determined to enter the workforce after serving nine years in prison. “As soon as I got released, my whole goal was to stay out, stay productive,” he tells me. Yet employers were reluctant to hire him.

“I did the interview, had a resume, never heard back from them,” he says. “I felt like, I might as well go back to robbing people and selling drugs again, if I couldn’t get a regular job.” Instead, he came to Homeboy, where he first trained as an installer but quickly found an aptitude for helping others with employment. “I was really good at getting trainees into solar careers,” he says. “I just had a talent, a knack for it. Honestly it was a blessing from God just to even move formerly incarcerated men and women into solar careers.”

David and Natalie met at Homeboy. Now, they both bring solar energy to the environmentally-disadvantaged zones of Los Angeles. “A lot of those low-income communities are communities like I grew up around, like my wife grew up around,” David says, adding that when they get a home of their own, it will be in a similar neighborhood.

“It’s a miracle every day that I’m here and just giving that second chance,” Natalie says about leading the classroom on the roof. “The reason that I love it is I’m teaching people who are coming from where I came from.”