PHOENIX – The Phoenix area is famous for its warm spring days and wealth of outdoor activities, but it’s also known for something less flattering: some of the worst air quality in the country.

The American Lung Association ranked the Phoenix-Mesa area as the seventh worst for ozone pollution, behind Los Angeles, San Diego and other California cities.

Evidence of that ranking is the brown cloud that often hovers over metro Phoenix, but because of a looming cloud of a different sort – COVID-19 – many residents are staying home and out of their vehicles.

“We’re seeing less of the emissions that come out of the back of cars,” said Nancy Selover, the state climatologist. “So the brown cloud, the brown cloud is very much reduced in the Phoenix area.”

In just one week’s time, daily traffic delays plummeted approximately 32% across Maricopa County, which is home to more than 4 million people.

The time that commuters spent in traffic fell from nearly 56,000 hours a day during the second week of March to about 38,000 hours in the third week, according to a travel time delay index by the analytics company INRIX. This means that on average the time Maricopa County travelers spent in their cars to get to a destination decreased.

Data from Descartes Labs in New Mexico also suggests a downward trend in Maricopa County’s mobility through its m50 index. This index looks at the median distance people in a given area travel from where they started the day. This lack of mobility is something Selover has noticed as well.

“Because the traffic is less, we’re seeing less air pollution,” she said.

The Arizona Department of Environmental Quality is collecting data on how COVID-19 has impacted emissions as people drive less. Gov. Doug Ducey on March 19 ordered gyms, bars and most restaurants in Maricopa County to close their doors to contain the spread of COVID-19, and on Monday extended the stay-at-home order to all 15 Arizona counties. That means people must remain at home unless they need to access essential services, such as the grocery store or the pharmacy.

“Vehicles driving on the roads are the biggest contributor to the man-made ozone in the Phoenix area and produce the majority of nitrous oxides (NOx) that are needed to create ozone,” Erin Jordan, ADEQ’s public information officer, said in an email.

Not all ozone is bad. Ozone higher in the stratosphere is produced naturally, and it’s necessary to protect against ultraviolet light. It’s the man-made ozone, produced by cars, manufacturing and power plants, that causes problems in the lowest level of the atmosphere.

Jordan said metro Phoenix was below average for moderate ozone days for the month of March, but she noted there could be many factors, including Phoenix’s recent wet weather, which can wash pollutants out of the air.

Other agencies, such as the South Coast Air Quality Management District in California, are detecting similar trends. Air quality has been good in the Los Angeles area, said Bradley Whitaker with the South Coast district, but weather factors into this, too.

“There’s been a lot of day to day changes in the weather and weather tends to be the most important factor that impacts air pollution concentration,” he said. “I would say, just generally, levels of emissions tend to drop during times of reduced economic activity, which we’re certainly in right now.”

And better air quality isn’t just being seen in Phoenix and Los Angeles but across the globe. Countries hardest hit by COVID-19, such as China and Italy, have seen significantly lower emissions. In China, emissions have gone down by more than 25% since the initial outbreak in late December in Wuhan, a major commercial hub.

That trend isn’t new. Emissions have historically dropped in times of crisis, for instance, wars and periods of economic uncertainty. During the Great Recession, economic activity slowed and emissions dropped, Whitaker said.

Although more time is needed to study how COVID-19 has impacted emissions, Selover said this decrease will be just a blip on the radar when it comes to the larger impact on climate in Arizona – at least for the immediate future.

“At this point in time, they’re not going to see those changes and emissions have any immediate impact on climate,” Selover said. “Temperature is not going to drop because of that or any of that kind of stuff.” 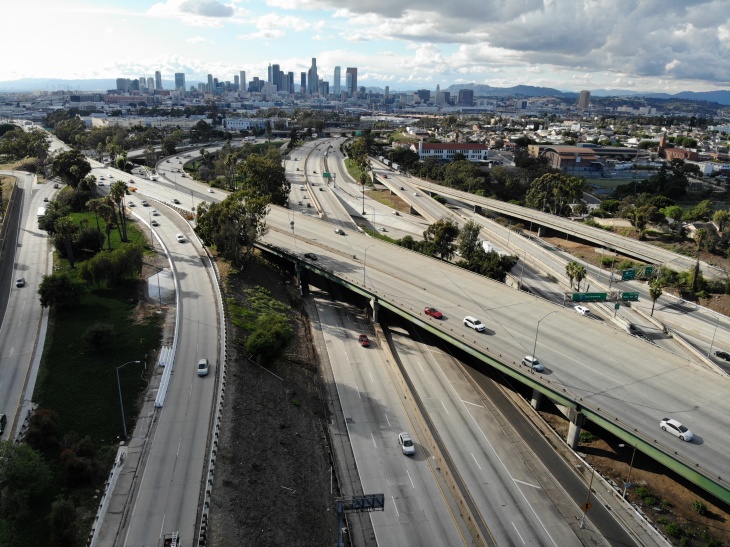 Silent LA: A Visual Diary Of A City In The Time of Social Distancing

With so many people staying at home, some might expect energy use to go up, but Arizona Public Service – the state’s largest supplier of electricity – reports that home energy use has seen a flat line of services. This means power use is more evenly spread throughout the day, leading to an increased opportunity for solar use during sunlit hours.

“We’re early right now in terms of the load forecast or what we are seeing. We are certainly seeing a decline in overall system load right now,” APS CEO Jeff Guldner said at the March 23 meeting of the Arizona Corporation Commission.

Regardless, some, such as Laura Dent, the executive director of the advocacy organization Chispa AZ, encourage people to think about the role emissions play in their daily lives. She hopes people will learn from this stay-at-home experience, adding that it shouldn’t take a global pandemic to achieve reduced emissions and other sustainability goals.

“We’re coming together for the safety of everyone,” Dent said. “It has been really inspiring to see the collective action across stakeholders in our community, individuals and families. We’d love to see that similar movement, build and grow in relation to this longer-term crisis related to climate change.”

Dent said recognizing the environment’s value is more important now than ever before. She sees that happening with people, who are staying at home to help prevent the spread of COVID-19, now turning to the outdoors as a way to get out of their homes, and remain physically distant from others.

“In the very early stages of self-quarantine, millions of Americans are recognizing the importance of public space and parks,” Dent said. “I think all of us can recognize that there’s so many added values, not only to making sure that our society continues, but also that we have, you know, quality of life and well-balanced for our families moving into the future.”